So, I came home from a few weeks at Lenny's and was both delighted and also disappointed when I looked at my micro sinningias. Mostly delighted, read on...

First, I was delighted because Sinningia muscicola (formerly named "Rio Das Padres") had not one, but THREE ripe seed pods which I picked off and put aside for a post I'll do later about sowing seeds. Oh and in addition to those 3 that were all ripe and ready, there are another 3 that are fresh, fat, and green that look like they'll be ready within a coupla weeks. Does this thing ever have a flower that doesn't self-pollinate? I'm starting to think not.

Then second, I was disappointed with what used to be my beautiful little glass globe full of Sinningia pusilla. What the heck happened?? This is how it looks after I plucked off all the rotting leaves. There was also some weird algea stuff growing on the surface of the potting mix, which I tried to scrape off as best I could. But in the end I was left with these straggly, bleached/pink mottled leaves, what a sad sight! 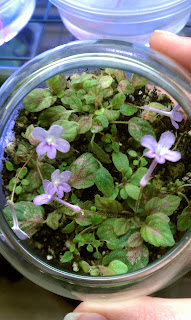 What is going on here? The foliage used to be so lush and green!
But third, back to delighted because speaking of pusilla, check out how big those babies that I separated have become! 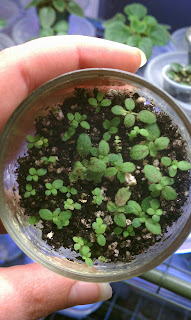 Serious growth! Remember how tiny they were not so long ago?
Lastly, I was even more delighted when I saw my 'Wood Nymph' bursting with blooms! Three of them I had to pick off because they were turning brown, but I was left with these five which isn't bad at all! Two are a bit distorted in shape because they were kinda stuck under foliage and I had to work them out with tweezers. Is that common? Also, there's a seed pod! I haven't had a seed pod on 'Wood Nymph' yet, so YAY! (Yeah I know there's also 2 non-seed pod spent stem thingies that I need to remove, I just didn't get to 'em yet haha) 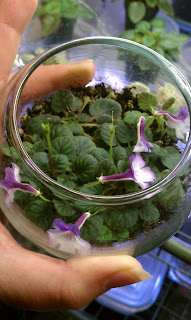 Oooh, flowery!
So that's what's happening with my "weeds"! Hope I can get that sad thing of pusilla happy again so that it'll be complete delight around here--If you have any tips, lemme know!
Posted by m3rma1d at 3:22 PM